First up, we look briefly at Action Comics 644.  This is just a brief look, as Kitty and Will make a two page appearance.

Then at three minutes and 55 seconds in (told you it was brief), we look at Starman 14. 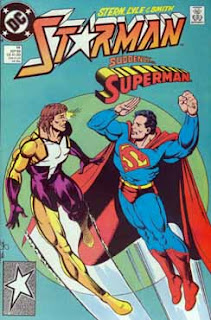 On Sale Date: August 1, 1989  (there was no Starman in July, but two for August, so once again, I’m covering one this month and the other one next month).
Cover Price: $1.00
Editor: Brian Michael Augustyn

After the phone call made in Action Comics 644, Superman shows up over here.

Next up, at 32 minutes in to the show, we look at Action Comics 645.  Much like the previous issue, this story only has 2 1/2 pages that concern us.  Having said that, here are the creator credits: 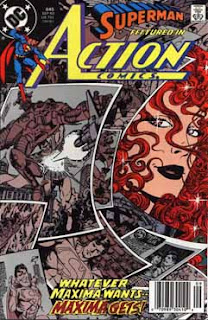 Again, another short segment as only a couple of pages is in our ballpark, but it's Superman, it's written by our very own Roger Stern and art by George 'Titan' Perez...  How can you go wrong?

Then, at forty seven minutes in, we look at Manhunter 17. 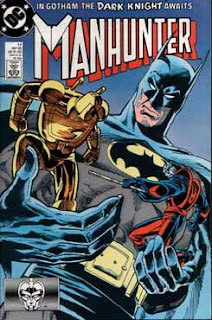 hmmm just now noticing that both our titles had guest appearances by the big Two.  Superman over in Starman and Batman here... interesting...  Sometimes, I can be a little slow.

Anyways.... Manhunter next appears in Flash #35, which I'll cover next month.

Finally at One hour and eight minutes in we end with, Cop-A-Comics Comic Rack.

From Crisis To Crisis: A Superman Podcast: A fantastic podcast where Michael Bailey and Jeffery Taylor look at Superman from 1986 through the early 2000's.  A great era, a great podcast, with great hosts.... Check it out.

Posted by Aaron Moss at 2:15 PM No comments: