Episode 2 : Yep the second issues of Starman and Manhunter!

Check out our first episode: Episode 2 : Yep the second issues of Starman and Manhunter!

First I look at the second issue of Starman!


Synopsis:
After revisiting the scene of where he got his powers, and find the local sheriff doing his own investigation, Will joins his sister, where they experiment to find out the extent of Will’s powers.
Wondering what he should do with his life and powers, he notices an article in the newspapers about a serial killer.  Wanting to help out, Starman introduces himself to the local police where he hears a report on the where abouts of the killer (headed to Mexico).

Starman stops the serial killer and rescues his hostage/next victim, earning the praise of the media. The cops still seem divided on him.

Meanwhile we find Dr. Melrose checking on his patients.  One of his assistants suggest they hire someone to bring Starman in.  We end the issue meeting the someone… Bolt!

Then at 46 minutes in, we look at the second issue of Manhunter. 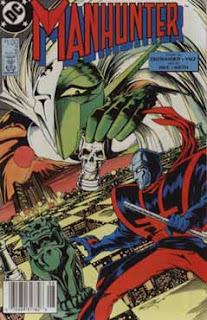 Synopsis:
Mark Shaw accepts an assignment from his father to travel to Japan to serve a subpoena to Stephen Lee, an American living overseas. The trip turns out to be a trap set by Dumas, an international assassin, who is actually Stephen Lee. Dumas uses his power of disguise to frame Mark for murder, then battles it out on the streets of Tokyo with Manhunter. Mark barely escapes, then he is approached by the Yakuza.

As for Cosmic Tracks:
I plug a friend of the show's contest. Check out: http://dcinthe80s.blogspot.ca/2016/03/our-first-contest.html for the contest.

You can Subscribe to our feed on iTunes or Stitcher Radio.  You can also subscribe to The Headcast Network for all of our Headcasts under one convenient feed!


Feel free to e-mail us your thoughts at starman-manhunter@headspeaks.com.